Course Fee – This is a sponsored program and hence free for participants.

Goddess Kali, also known as Kalika in Sanskrit is the most significant Goddess in Hinduism according to the Kaula Marga methodology.

Kaulamarga methodology is part of the Shakteya Tradition which is one of the very ancient and powerful Tantra Vidya traditions.

Kali is Among the ten Mahavidyas, first and most important among all of the Dasa MahaVidya’s.

Kali, the ultimate form of Brahman,”Devourer of Time” is the supreme deity of Kalikula programs. Mahakali has pitch-black complexion, darkest than the dark Death-Night. She as three eyes representing the past, present and future. She has shining white, fang-like teeth, a gaping mouth, and her red, bloody tongue hanging from there. She has unbound, dishevelled hairs. She wears tiger skins as her garments, a garland of skulls and a garland of rosy-red flowers around her throat, and on her wrists, she was adorned with scrawny bones, skeletal hands in addition to severed arms and hands as her ornaments. She has four hands, two of them were empty and two others carried out a sword and demon head.

Kali’s earliest appearance is that of a destroyer of evil forces. She is the most powerful form of Shakti, and the goddess of one of the four subcategories of the Kaulamārga, a category of tantric Saivism. Over time, Kali has been worshipped by devotional movements and tantric sects variously as the Divine Mother, Mother of the Universe, Adi Shakti, or Adi Parashakti. Shakteya Hindu and Tantric sects additionally worship her as the ultimate reality or Brahman. She is also seen as the divine protector and the one who bestows moksha, or liberation. Kali is often portrayed standing or dancing on her consort, the Hindu god Shiva, who lies calm and prostrate beneath her. Kali is worshipped by Hindus throughout India.

Kali is the fiercest manifestation of the beautiful and powerful goddess Durga in her triumphant battle against the forces of evil. Durga is the goddess of power, the destroyer of negativity, and unwavering strength in the face of adversity. The story of the origin of Kali from Durga and her annihilation of demons symbolizes the need to fiercely confront one’s own limitations and negative qualities and eliminate them.

The destruction of demons by Kali symbolizes the destruction of our inner enemies by our higher nature. The demons are our own pride, passion, inertia, indiscipline and great rage when thwarted—qualities of the ego that hinder spiritual progress. The goddess, as our divine inner guide, relentlessly goads us to higher levels of self-perfection so that we can finally experience the bliss of our true divine nature.

Supreme Lord of Shaivism, Lord Shiva himself, seeing beyond the realm of the senses to the deep mysteries of the heart, and surrendering his pride utterly before the magnificent goddess Kali, attained the highest state of bliss and inner knowledge.

Lord Shiva in his highest state of bliss sung a hymn of praise by using a thousand words. His hymn of praise exhorts all devotees of the goddess to assume a similar posture of reverence, yearning and ecstatic devotion toward Kali, the dark goddess, whose profound mysteries take us beyond ordinary understanding.

Learn Kali Sahasranamam by chanting with the right pronunciation and meaning through Vedicology.

In case you are interested in attending this program, please fill out the contact form below and one of our team members will get in touch with you. 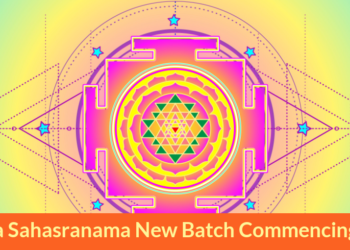 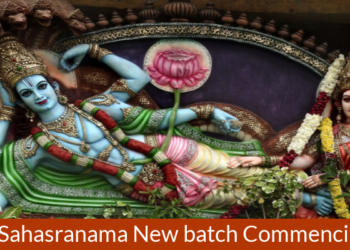