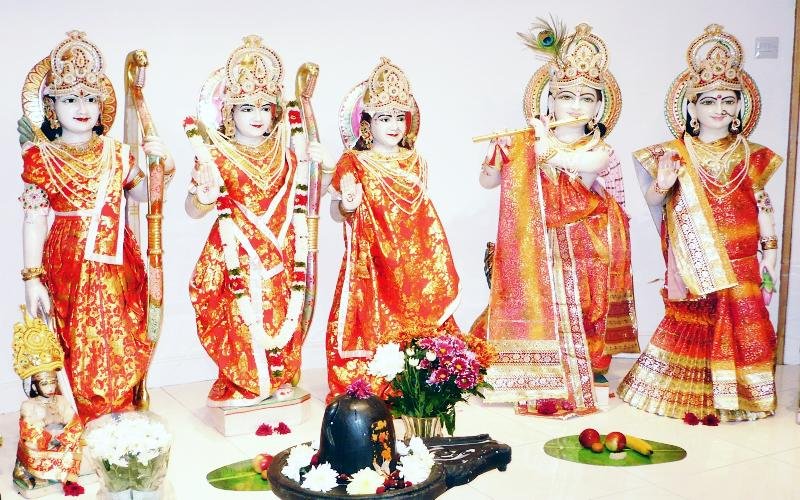 What is Idol Worship in Hinduism: God is Formless, Why Idols then?

Idol Worship in Hinduism has been present for quite a long time. What is Idol Worship? When I was about 4-5 years old, I remember going to our nearby temples every evening or morning with my parents. They would get me tasty Prasadh and let me play on the stone floor of the temple. Meanwhile, they would go inside, recite mantras, pray to God and come out with colour powders on their forehead and flowers in their hands. I used to see a beautiful sculpture of a lady dressed in a gorgeous Saree. My parents said she was God and we all pray to her. After two years, I heard a speaker at my school say “God is one and God is formless”. But this confused my idea of God. Was there any idol worship in Vedas, I wondered. So in this blog, let us make it simple to beginners.

The Confusion Around Idol Worship in Hinduism

In India, there is a common idea that God is one. God has no form. Controversially, India is also known for its ancient sculptures of God. Why does this paradoxical situation arrive? At some point in time, everyone would have heard “God is one”. Either in movies or philosophical discourses about religious unity. From my early ages, I was preached about how shrutis, smritis and Puranas depict God to be of the form in which the devotee perceives to be. I wondered how can God be formless and yet we have sculptures and pictures giving it form. These forms are well defined by their intricate structures. Therefore, idol worship in Hinduism contradicts the formless nature of God.

We all would have heard about Helen Keller. The story of how she just feeling water to be a cool substance flowing around her fingers is well known. But the frustration and struggle she went through to understand such simple concepts were tremendous. Such difficulties are unsung. No one would prefer to undergo such pain when they can see the form of water rather than understand from the description. Human psychology is to see and observe the form to believe it. A lot of friends or family would not have believed us when we explain to them what we saw rather trust us when they see it themselves. Even we would have not believed our acquaintances sometimes. Idol worship in Hinduism is probably about the psychological effects – about giving form to God.

What we see with our eyes influences our thoughts. Take, for example, we cannot imagine how a cloud would be just by hearing about it. Seeing a cloud helps us perceive a clear image of what it is. Well, then a cloud is also not how we see it from a distance, Isn’t it?

In the same manner, to believe and worship God with utmost devotion, just describing how you feel God is not enough. Thus, God is given a well-defined form and therefore the idol worship in Hinduism. Or rather to make it simple, God is given a form that you would like to see. Every Religion has its own form of the symbol for God. Christianity has Cross, Muslims have moon and star. Yahudis worship fire as God. People started sculpting images of God when Shilpa Shatra emerged in Puranas. They do it for a mental connect. Just as they say, beauty lies in the eyes of the beholder, the shape and form are for you to see and relate.

.Focusing on the symbol of God or Sculptures helps them to strengthen the spiritual side of themselves. As the human mind tends to distract, a focus point is significant. The devotion to God is instilled in the idols of God and the practice became significant during the bhakti movement in the early days. Idol worship makes it possible for devotion to be anywhere and everywhere from small temples to even at home. Therefore idol worship also helps people to focus.

However, God is formless, is the truth. The Vedas explain the concept of God as someone who cannot be explained, as the universal consciousness. It is undeniable universally. Accepting and adopting this idea is the first step toward Spiritual awakening. Thus, spiritual seekers mostly require idols, forms, shapes and pictures during their early stages. Yes, Idol worship is prevalent as it makes devotion and mindfulness easier for common people in their hustle of life. This concept gives a common man hope, peace and happiness during his early stages of spiritual progress. Therefore, these are some of the significance of Idol worship in Hinduism.

What are Sutras and Brahmasutras? Sutras Meaning

What are Sutras and Brahmasutras? Sutras Meaning

Apartment Vastu - Is It A Gamechanger?

Significance of Bangles in the Indian Society