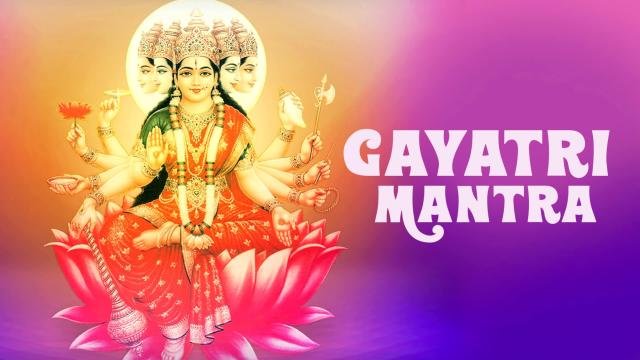 Before we proceed to Gayatri Mantra, we will understand the meaning of Mantra. A mantra is a sacred word or words recited and contemplated upon at the time of worship. The root “man” in this word mantra comes from the first syllable of that word meaning “to think,” and “tra” from “trai,” meaning “to protect or free” from the bondage of the phenomenal world. Mananāt trāyate iti mantraḥ, which means ‘that (word or phrase) which leads us to the highest Goal through reflection is called a mantra.’ Mantra, when used repeatedly, keeps the body and mind focused on the moment. This is the reason why yoga uses mantras like Om

‘We meditate on Om, the supreme Reality that enters the earth, interspace, and the heavens. He who is worshipful and loved as the Lord Sun. The Lord shines as the light of Consciousness in our minds. Burn away our ignorance and light our minds[with the wisdom of the highest Truth].’

The Gayatri mantra is one of the most ancient mantras. It is a widely used divine hymn. The significance of Gayatri Mantra is that it represents the essence of Hinduism and the Vedas. The mantra reveals itself to Rishi Vivamitra during his meditation. It turns out to be a treasure of wisdom in both the spiritual and secular fields. It is so because the Gayatri Mantra grants the seeker cosmic energy, acute intelligence, delicate discrimination, creative vision, healing powers, and ultimately, self-realisation.

The word Gayatri means gāyantam trāyate iti gāyatrī, which means ‘that which protects the one who sings or chants it.’ Trayata also means ‘that which takes one across the ocean of incarnation or saves one from the cycle of birth and death.’ Therefore, the meaning of Gayatri Mantra is to lift the darkness from the heart and fill it with light. The chanting of the Gayatri mantra invokes divinity in a person and blesses him with spiritual light. As you all are aware, this universal prayer is for the ultimate insight. Therefore, chanting it for material gain is in vain.

Some ancient texts also refer to Gayatri Mantra as Savitri-Gayatri. It is so since the meaning of Gayatri Mantra indicates that it is an invocation to the Lord in the form of the Sun: Lord Sun. Lord Sun represents the giver of Light (knowledge), the illuminator of all experiences, Atman. As pure Consciousness, Lord Sun is the core of our being. It is around Him that all our matter revolves, just as the entire solar system revolves around the Sun with exact precision. We are just like the earth without Sun; we wouldn’t exist without the Atman.

The Gayatri mantra is central to the teachings of yoga, Vedanta, Ayurveda, and Vaidika astrology. In yoga, it transforms the yogi by waking his kundalini Sakti. To the Vedanta, it gains self-knowledge. The Mantra bestows the power of the cosmic prana, born of the Sun, to the master of Ayurveda. For the jyotiṣa or astrologer, the Gayatri Mantra grants the knowledge of the heavenly bodies’ movements ruled by the cosmic Sun.

The Gayatri meter on which the Mantra composed consists of three lines of eight syllables each.

Vastu Plants for Office: Which Plants Should You Keep?

Colours according to Vastu for Shop