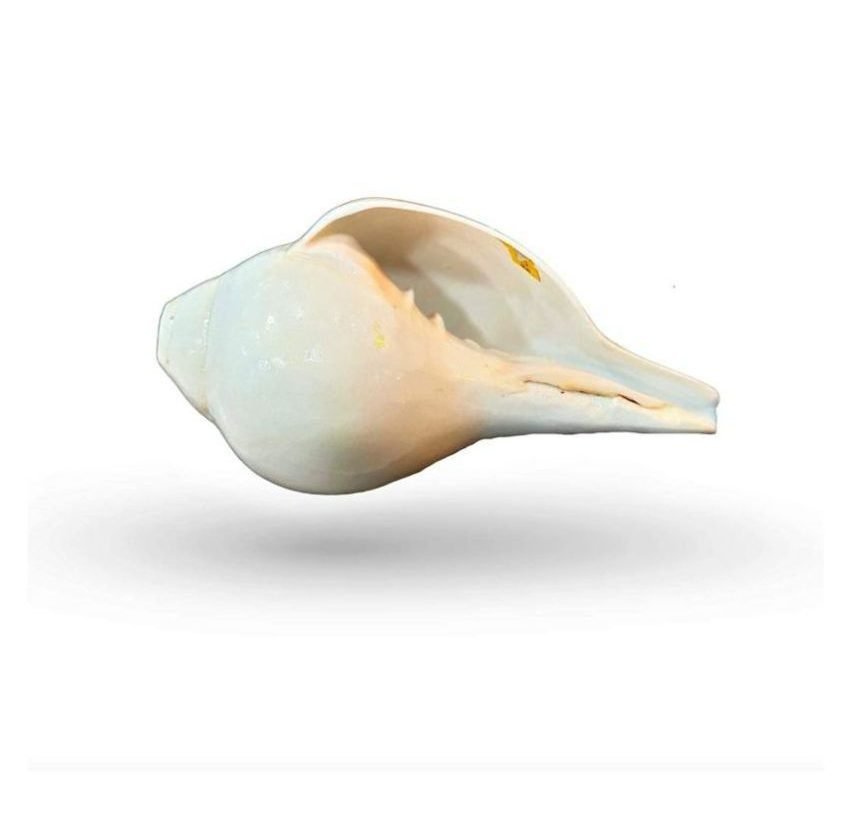 In the world of Sanskrit, shankha is known as the sacred shell or conch.

In the following excerpt, you would get to know in detail about the sacredness, creation and journey of shankha in Hinduism. Let’s dive straight into the significance of Shankha or Conch

In the world of Sanskrit, shankha is known as the sacred shell or conch. Similarly, in the world of Hinduism, it is a sacred and a religious object. The sound of the shankha symbolizes the divine sound of Aum.

It derives its name from the demon Shankha aura. This is the one whom Lord Vishnu had slain as matsya avatar or fish incarnation via blowing Aum into the conch-shaped bone of the asura’s ear.

The Phase Of Creation – Significance of Shankha or Conch

The Brahma Vaivarta Purana tells us about the unique and interesting creation of conches.

Once upon a time…

Lord Vishnu took a trident from Lord Shiva and flung it at the demons. This made them burn instantaneously. This led to their ashes flying over to the Ksheersagar, creating conches.

It is a belief that Shankha is a brother of Lakshmi as both of them were born from the sea. Due to the association of shankha with water, serpents or nagas are also named after it. Nagas mentioned in the Mahabharata, Harivamsha Purana and Bhagavat Purana include names like Shankha,

It’s Got Two Homes – Significance of Shankha or Conch

All of the above are also in the frame holding a shankha. Sometimes, Vishnu’s shankha is also personified as ayudha purush.

Similarly, Gaja Lakshmi idols show the goddess holding a shankha in her right hand. In the Ramayana, Lakshmana, Bharata and Shatrughna are considered part incarnations of Sheshanaga, Sudarshana Chakra and Shankha, respectively.

Looking Back In Time

Long back, there was a war at Kurukshetra, between the Pandavas and the Kauravas. Then the Krishna was the charioteer of Arjuna, who eventually blew his conch. And the Panchajanya which means having control over five classes of beings. They made a decision to declare the beginning of the epic war.

At that time, all the Pandava brothers had their own shankhas.

Well, the shankha has different regional names. In Sanskrit, Kannada, Marathi and Hindi language, it is called, as usual, the shankha. In Gujarati, it is known as da-sukh. Likewise, the chanku in Tamil and soukham in Telugu and shaankh in Bengali.

Types of Shankhas – Significance of Shankha or Conch

A shankha, in nothing but the shell of a large predatory sea snail- Turbinella pyrum. And this is found in the Indian waters. However, in English, the shell of this species is known as the ‘sacred conch’ or even the ‘divine chank’.

Like all snail shells, the interior of this shell is hollow and very shiny. Based on the direction of coiling, shankhas have two varieties, I.e, the vamavarti and the dakshinavarti.

In the world of Hinduism, a dakshinavarti shankha symbolizes infinite space. Even if such a shankha has a defect, mounting it with gold restores its merits. The Skanda Purana also narrates that bathing Vishnu with a dakshinavarti shankha is simply wow. Because this act grants the devotee freedom from the sins of seven previous births.

According to another belief, one considers bathing a deity with the waters led through a dakshinavarti shankha equal to bathing it with all the holy water of the seven holy rivers. Yes, you heard that right! The price of such a rare shankha runs into lakhs of rupees very easily.

Significance of Shankha or Conch

In its earliest references, the shankha is spoken of like a trumpet. And it is in this form that it became an emblem of Vishnu. Simultaneously, people were using it as a votive offering and as a charm to keep away the dangers of the sea. Back then, it was the earliest known sound-producing agent.

As a trumpet or a wind instrument, one drills a hole near the tip of the apex of the shankha. When air is blown through this hole, it travels through the whorls producing a loud, sharp and shrill sound.

This particular quality of sound is the reason why shankha was put into practice as a war trumpet, to summon helpers and friends. It did not stop there. The shankha continued to be used in battles for a long time. The war sound it produced was called shankhanad.

The Giver Of Fame – Significance of Shankha or Conch

In the Hindu scriptures, one often praises the shankha as a giver of fame, longevity, prosperity and the dispeller of sins. One can trace its antiquity to the early days of Indian history. This was when it was blown to drive away evil spirits and demons.

In the ancient days, people were properly trained in blowing the conch. They had knowledge of the different notes for blowing the conch on different occasions. It was blown with a soothing note to welcome an honoured guest. Also, with a high- pitched or a shrill note to announce victory. However, the note that came from the conch during arati was quite different.

Uniqueness At Orissa – Significance of Shankha or Conch

In Orissa, there is a community wherein people can blow two conches at a time. Yes, that’s true! Ancient India was mostly amongst the villages. And each village had a principal temple and several small ones as well.

During the arati of the deity, one would blow the conch invariably, as one does it even today. Since villages were generally small, the sound of the conch would resound and echo all over the village. Those who could not make it to the temple or were not allowed in, would stop whatever they were doing for a few seconds and mentally bow to the Almighty. Thus, the sound of the conch acts as a serving to elevate people’s minds to piety even in the middle of their busy daily routine.

Finding Its Reflections In Islam

In Islam, this similar feeling and result, one can achieve it through the azan. Azan is the calling of the faithful to prayer in this religion. It is a popular belief that a person who regularly blows a conch never develops any respiratory problem. His lungs would never go for a toss.

Did you know that even listening to the sound of the conch is said to benefit those who are dumb or who stammer? Yes, you heard that right! Only via blowing the conch, one throws out the stale air present in the body. And then one replaces it with fresh, revitalizing air.

The well-known scientist, Acharya Jagadish Chandra Bose, has also made a solid proof theory. It states that blowing the conch and ringing the bells regularly, the immediate surroundings become pure and peaceful.

The reason behind this is that its sound removes negativity from the area. That is why when we go to traditionally maintained temples, we find them serene and comforting.

Science and Significance of Shankha or Conch

Scientifically too, the blowing of conch has several benefits. It is a fact that the sun’s rays obstruct the expansion of sound. And for this reason, radio transmissions are less clear during the day than at night. Therefore, the conch is blown at holy places at about sunrise and near sunset.

When a man accurately blows the conch, two things may happen. Its sound either destroys the bacteria in the atmosphere that is harmful to humans. Or it makes them inactive. Thus, blowing the conch cleanses the surroundings.

Uses of the Shankha

Nowadays, the shankha is blown at the time of worship in Hindu temples and homes. Especially during the arati at home, when light is offered to the deities.

People also use the shankha to bathe images of deities, especially Vishnu, and for ritual purification. The shankha has several other uses as well. It is also useful as a material for making bangles, bracelets and other objects. Due to its aquatic origin and resemblance to the vulva, it has become an integral part of tantric rites. Did you ever know this fact?

Well, because of this, its symbolism is also said to represent female fertility. It is mentioned that in ancient Greece, shells, along with pearls, denoted sexual love and marriage, and also the female energy, adyashakti.

Remember that one does not drill any sort of a hole into shankhas. Because they are used for bathing purposes or for distributing tirtham or holy water. After a puja, priests, especially in south India, distribute tirtham to devotees through a conch. The science behind this ritual is that the conch has sulphur, phosphorus and calcium. And therefore, the water kept in such a vessel makes it medicinal.

The puja enhances its overall divinity. Hence the name of such water is tirtham. Moreover, when one sprinkles the conch water over people and objects, it disinfects them.

The shankha is also a great boon in Ayurvedic medicinal formulations. This thereby helps in treating many ailments. Conch shell ash is known in Sanskrit as shankhabhasma. When one soaks the shell in lime juice and then calcines it, the preparation begins. One should also cover it crucibles ten to twelve times, and finally, reduce it to powder.

Shankhabhasma contains calcium, iron and magnesium. Did you know that this is taken as a consideration to possess antacid and digestive properties? Interestingly, the shankha was the royal state emblem of the erstwhile state of Travancore. Puri, in Orissa, is known as Shakkha-Kshetra. It is also the election symbol of the Indian political party, the Biju Janata Dal.